We know that KIF1A is expressed in neurons, but one question we still have is which neurons, and how does this impact specific parts of the nervous system? KIF1A’s unique traits like its fast movement speed may make it more important for some neural circuits than others. This is a crucial aspect of understanding symptoms and creating treatments. This week we’re highlighting a study that knocks down a different kinesin, KIF15, to determine its role in auditory and vestibular (balance) development in zebrafish.

Researchers reduced expression of KIF15 in zebrafish and found that inner ear development was disrupted, including a loss of hair cells. Because hearing and balance are both crucial for proper movement in zebrafish, their locomotion was severely reduced as well. These functions were rescued when KIF15 knockdown was co-injected with KIF15 mRNA to restore protein levels to normal.

While auditory dysfunction is not a common concern in KAND, the vestibular system’s role in motor dysfunction is still unknown. Does KIF1A play a similar role to KIF15 in this system, or are the functions of these specialized kinesins serving different systems entirely?

With the recent announcement of our KOALA (KIF1A Outcome measures, Assessments, Longitudinal And endpoints) Study, many of you may wonder how clinical endpoints are classified. Today we’d like to discuss a few of these classifications.

In a clinical trial, endpoints are measures of outcomes to evaluate the impact of a treatment on the participants. Usually, the endpoints are included in the study objectives of the trial, such as survival, absence of disease, decreased pain, etc.

Primary endpoints measure the outcomes that will answer the most important question of the trial regarding treatment efficacy.

Secondary endpoints answer less important questions of the trial, but can still be used to evaluate the effects of the treatment, e.g. reduction in pain.

Direct/clinical endpoints directly measure how a patient feels, behaves, or survives. In KAND, they might include motor function, cognition, epilepsy and vision. Some outcomes may be difficult to assess in a relatively limited duration of time. But to shorten a trial, a surrogate endpoint can track the progress and extent of the disease.

Surrogate endpoint is a substitute for the clinical endpoint. Most of them are biomarkers measurable in a lab, such as changes in brain volume and level of toxic proteins. To develop a biomarker, you need to prove its relevance to the clinical manifestation of the disease.

Hard endpoints are quantitative measures such as survival time. They are indispensable in a clinical trial and should be valid, standardized, and well-defined in a study protocol. As such, they can give a definitive assessment on the efficacy and safety of the treatment.

Soft endpoints are qualitative measures that need subjective assessment by the patients or clinicians, e.g. quality of life. They do not strongly relate to the disease, but they have direct relevance to the patient and thus should be taken into consideration.

Composite endpoints are a combination of multiple endpoints. A treatment can act in different ways in different people and can potentially produce both beneficial and toxic effects. A single endpoint may not be able to cover all the important effects of a treatment. When using endpoints like survival rate, we might face challenges including low event rates, high cost, and long follow-up. Therefore, a number of endpoints can be considered in a study in order to accelerate the process of regulatory approval.

When we talk about a possible treatment for neurological disorders, we typically think that it would be medicine. But in fact, implanting electrodes to control the symptoms of neurological diseases is a possible method. Nerve electrodes and devices are surgically implanted into a patient’s body and control the nerve’s electrical signals for a long period of time thereafter. This method can relieve symptoms such as epilepsy. But both the surgery itself and the implanted device can bring pain to the patient. “Injectrode” is a novel electrode injected into the body as a liquid. Like the tiny electrode implanted into the brain or peripheral nerve through surgery, it can be connected with external equipment to stimulate the nerve for medical purposes. Andrew Shoffstal, assistant professor at Case Western Reserve University, said, “It is like a kind of conductive glue.” The “injectrode” is actually like a kind of surgical glue that would be injected into the human body instead of implanting a complex device like a pacemaker. After being injected into the human body, it can form an electrically conductive interface with nerve tissue and could be extruded back to the skin’s surface, and the electrical equipment outside the body can talk with the nervous system. Kip Ludwig, associate professor of Biomedical Engineering at the University of Wisconsin-Madison, is one of the creators of “injectrode,” and his team has conducted a clinical trial. They implanted “injectrodes” into patients for 30 days and found that the “injectrode” could communicate with the nervous system in good condition without side effects. They believe that the injection electrode is expected to become a minimally invasive, early-stage treatment for neurodegenerative diseases. If “injectrode” can be successfully applied, it means no surgery, fewer complications, and lower costs for treatment. 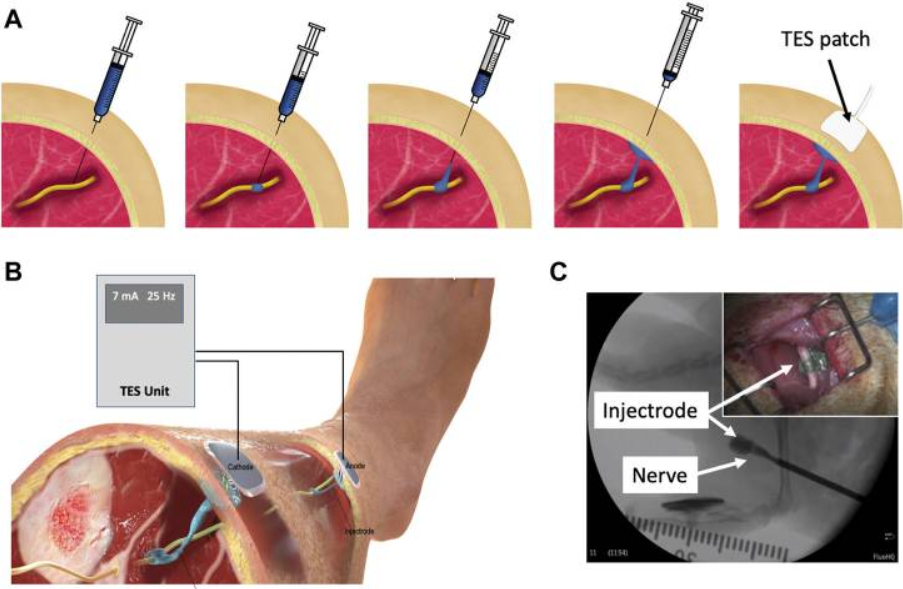 Fibrils are infamous for occurring in neurodegenerative disorders – a prominent model being the Amyloid fibrils in Alzheimer’s. The Zuckerman Institute at Columbia University has performed a new study and found a new fibril that has been associated with more than one of these disorders. According to the study, a protein known as TMEM106B, typically involved in clearing the junk present in organelles such as the lysosome or endosome, is responsible for fibrillation. This protein separates into fragments and reorganizes itself to form “cell-hobbling fibrils”,  as shown below.

The scientists performed spectroscopy tests to obtain information on the 3D structure of the protein and concluded that the final protein was TMEM106B, based on previously known amino acid sequences. This finding surprised the scientists since they expected to see long-known fibrils such as those in Alzheimer’s. While the studies so far indicate the presence of fibrils only in diseased brains and have not been proven as a cause for the disease itself, this significant discovery could be a common thread for multiple neurodegenerative disorders, and the research team believes that it could lead to new interventions. This could benefit rare disease communities as a common thread would pool research efforts across various diseases to study a particular issue occurring in prevalence and could result in speedy advances.

Understanding rare and common diseases in the context of human evolution

From an evolutionary perspective, why do rare diseases exist? And what does it have to do with ancient human history?

Any variant of a gene that exists in a population is called an “allele” (think of blood groups; A, B and O are all different alleles of the same gene). An allele can impact the likelihood of an individual to have offspring and thus pass on their genes (this is sometimes called “fitness” by biologists). The impact of an allele on fitness helps to determine how often that allele occurs in a population (referred to as allele frequency). For example, on average, individuals with allele X will have more offspring than individuals without allele X. Slowly, the frequency of allele X will increase in the population. Likewise, if allele Y negatively impacts fitness, slowly, the frequency of allele Y will decrease in the population. This process, whereby the fitness of individuals carrying allele affects the allele frequency is called selection. So then, why do alleles that negatively impact fitness, such as ones that cause rare diseases, exist?

Although the answer to this question is almost an entire field of research in itself, we will focus on the part that has to do with “genetic drift”. Genetic drift refers to changes in allele frequency that are brought about by random processes. As an example, let’s imagine allele Z, which has no impact on fitness. The frequency of allele Z will randomly go up or down depending on how many offspring individuals carrying the allele have. However, drift can also affect alleles that impact fitness. Someone with allele X (which positively affects fitness) may have a piano fall on their head and so never be able to have offspring. This would see the frequency of allele X go down. Alternatively, someone with allele Y (which negatively impacts fitness) may have lots of offspring, causing the frequency of allele Y (which may cause rare disease, for example) to go up. So, selection and drift can work against each other. Drift, through a random process, may be increasing the allele frequency of an allele while selection, by a non-random process, decreases the allele frequency. 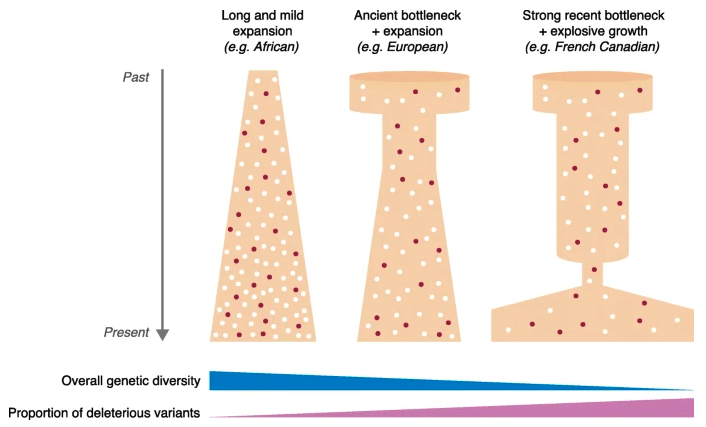